This tool allows you to move or to deform three-dimensional, unstructured, mixed-element grids. It is intended for flow simulations with moving boundaries (moving flaps and rudders, flutter, etc.), or where grid boundaries are reshaped by an optimizer.

The package consists first of a standalone program. In order to deform given grid, it requires the input of a file with boundary conditions and displacements, and of a file with user settings. After execution, it writes out the deformed grid and provides information about how the grid has changed. It also alerts the user if the grid was or became invalid. Grid files for MoveGrid employ a very simple binary format, user specific grid formats can be incorporated as well.

The package also contains a library with the same functionality as the standalone program. Thus, you can move / deform the grid according to given boundary conditions by calling the library from your own software. User interface to the library consists of a single function call. The library is written in plain C, it can however be accessed from a Fortran program via a simple wrapper function. The library does not depend on any third-party software.

Finally, we include also a post-processing utility, which compares the original and the deformed grid. For each grid point, it writes out the displacements, the minimum volume, and the maximum volume change to a plot file. The package is completed by a test example and user's manual.

We offer packages for the following platforms: Linux (64-bit) and Windows® (32- and 64-bit, 7 and higher). MoveGrid can be purchased in the form of a license. Either time-limited or perpetual licenses are available, and if desired include e-mail support and updates. Please, contact us for an individual offer tailored to your needs - whether you are a single person, an educational institution or a large company. If you wish, you can evaluate the software (on a single platform) for one month, completely free of charge and with no obligations whatsoever.

The following images show the application of MoveGrid to a deforming turbine guide vane. The grid around the blade consists of a mix of prisms (in the viscous near-wall region) and of tetrahedra. The grid is rotationally periodic. Please note that the applied deformation shall serve here the purpose of testing the tool, not as an example of a technically meaningful configuration. 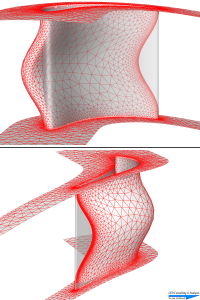 The image (click to enlarge) shows the surface grid of the vane prior (gray transparent shape) and after the deformation. The maximum deformation occurs at the mid-section of the blade. The periodic boundaries (to the left and right of the blade; not displayed here) are left to move freely. All other boundaries - hub, casing, inlet and outlet planes are kept fixed.

Horizontal cut through the grid at the mid-section demonstrates the capability of MoveGrid to preserve the structure and the spacing of the viscous layer around the body (composed of prisms), despite the considerable deformation of the wall (lower part of the image). The tool also largely prevents shearing of the prismatic cells, especially around the leading edge of the blade. 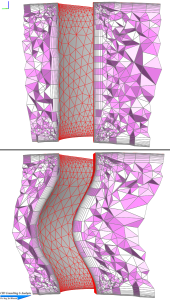 Vertical cut through the grid confirms too the ability of MoveGrid to produce a valid grid even in such a demanding case (lower part). Note the deformation of the periodic boundaries as computed by the tool. Although not obvious from the image because of the "rough cut" through the grid, the condition of rotational periodicity of the boundaries is satisfied. 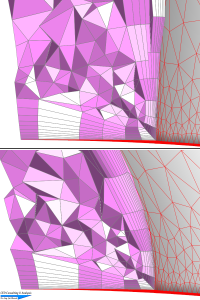 The last image show a zoom of the corner between the suction side of the blade and the hub. The grid remains valid, despite being squeezed together by the deforming blade (lower part). The prismatic layers stay all intact, the spacing and the orthogonality of the grid near the wall are preserved reasonably well. This is particularly important for an accurate simulation of viscous flow past the blade.

Example 2: Flapping Wings of an Airplane

The following video demonstrates application of MoveGrid to the case of strongly bending wings of an airplane. The grid consists purely of tetrahedra. Please note again that the applied motion shall serve here the purpose of testing the tool on behalf of a large grid deformation, not as an example of a technically meaningful configuration.